Back to Journal
After 17 grueling days without an after work build activity and trying to forget this was hanging in my closet it was finally time to sand and buff.  I had 2 days to get it done before a massive heat wave hit Seattle. I did not want to use the elbow grease in 100+ temps, and I was concerned it would soften the finish.
I made some slightly soapy water in a dish and soaked a series of micromesh for ~6hours before starting.
I was super concerned about sanding through and needing to wait another two weeks so I started with 1400 micromesh backed with a foam block.  There was a good bit of orange peel which I managed to whack down a good bit, but I didn't go overboard and was hopeful it would get resolved with further grits.
After a few grits I had the process down and started feeling more confident with my technique. "Avoid the edges, don't press too hard, take breaks, rinse and wet the paper more than you think you would need, inspect often"  I took my time, followed all the advice I read and managed to get up to 12000 grit without too much issue.

I did sand through in one spot on the side where the 90 degree angle of the bottom point meets the curve, but it is fairly hidden so I am not too worried about it.

After lots of inspection in the sunlight I finished hitting any rough patches with the 1200 and moved on to buffing.  At this point the finish was looking great and I considered not even needing to buff, but I had the stuff so I figured I would give it a shot, and boy am I glad I did.  I skipped the medium and fine compounds and went right to swirl remover, and that one seemed to be the correct grit after 12000.  Using lots of elbow grease, time and compound I buffed up the entire finish and I was amazed.  Like everything else on this mandolin, it isn't perfect but it is WAY better than I ever expected it to come out.

I am waiting for the heat wave to pass before putting the hardware back on, then it is time to play this thing until it comes alive. 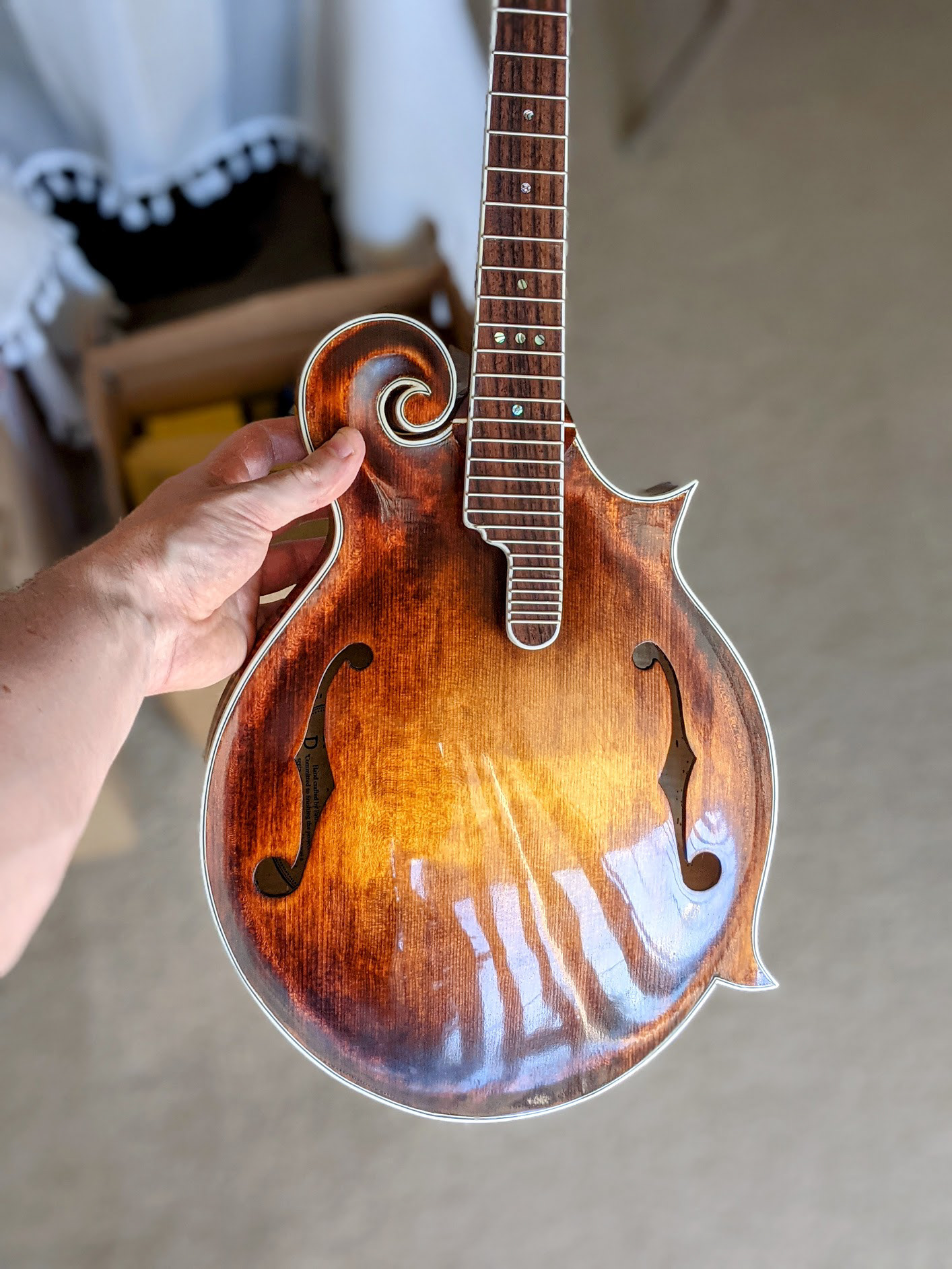 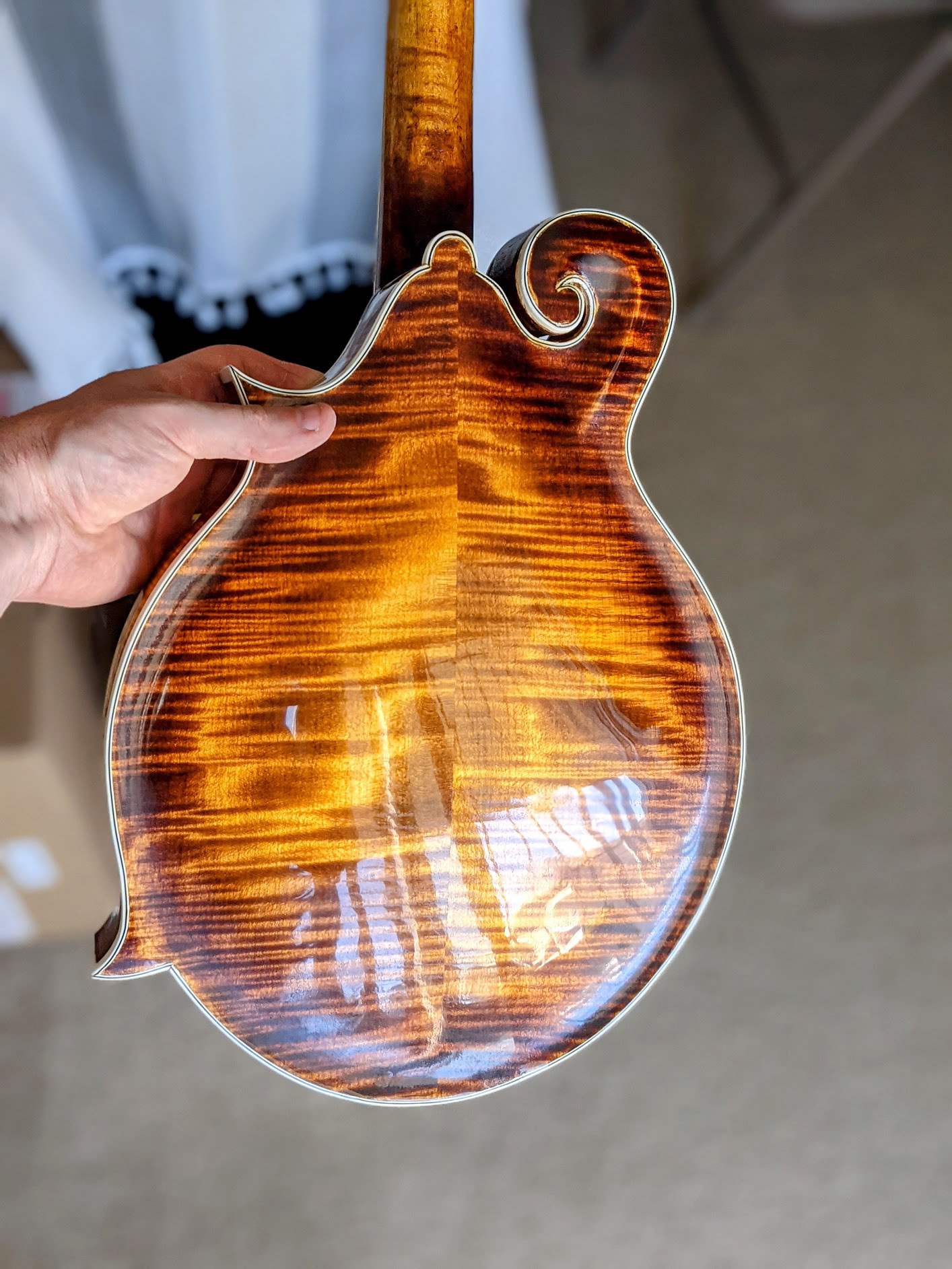 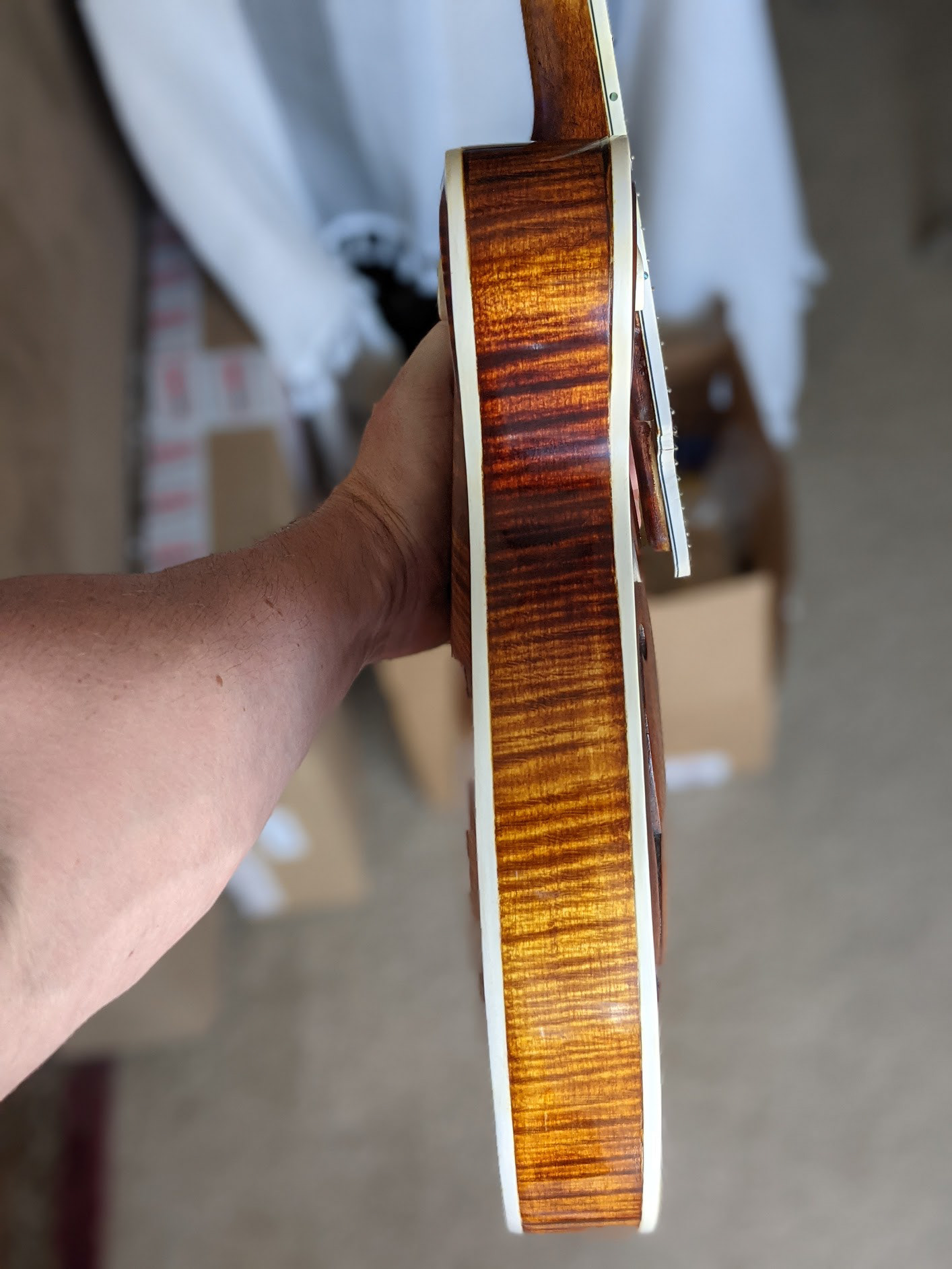 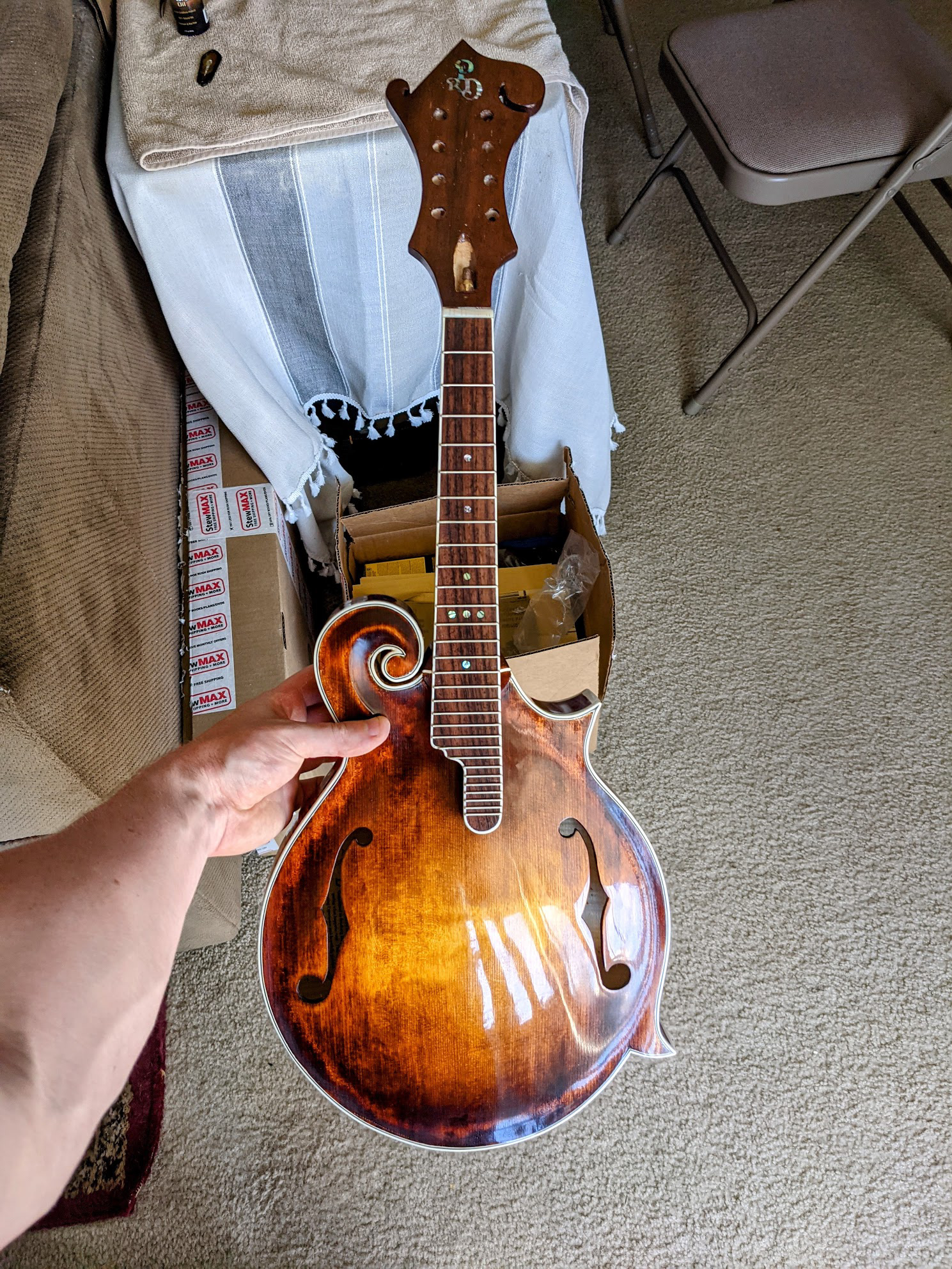 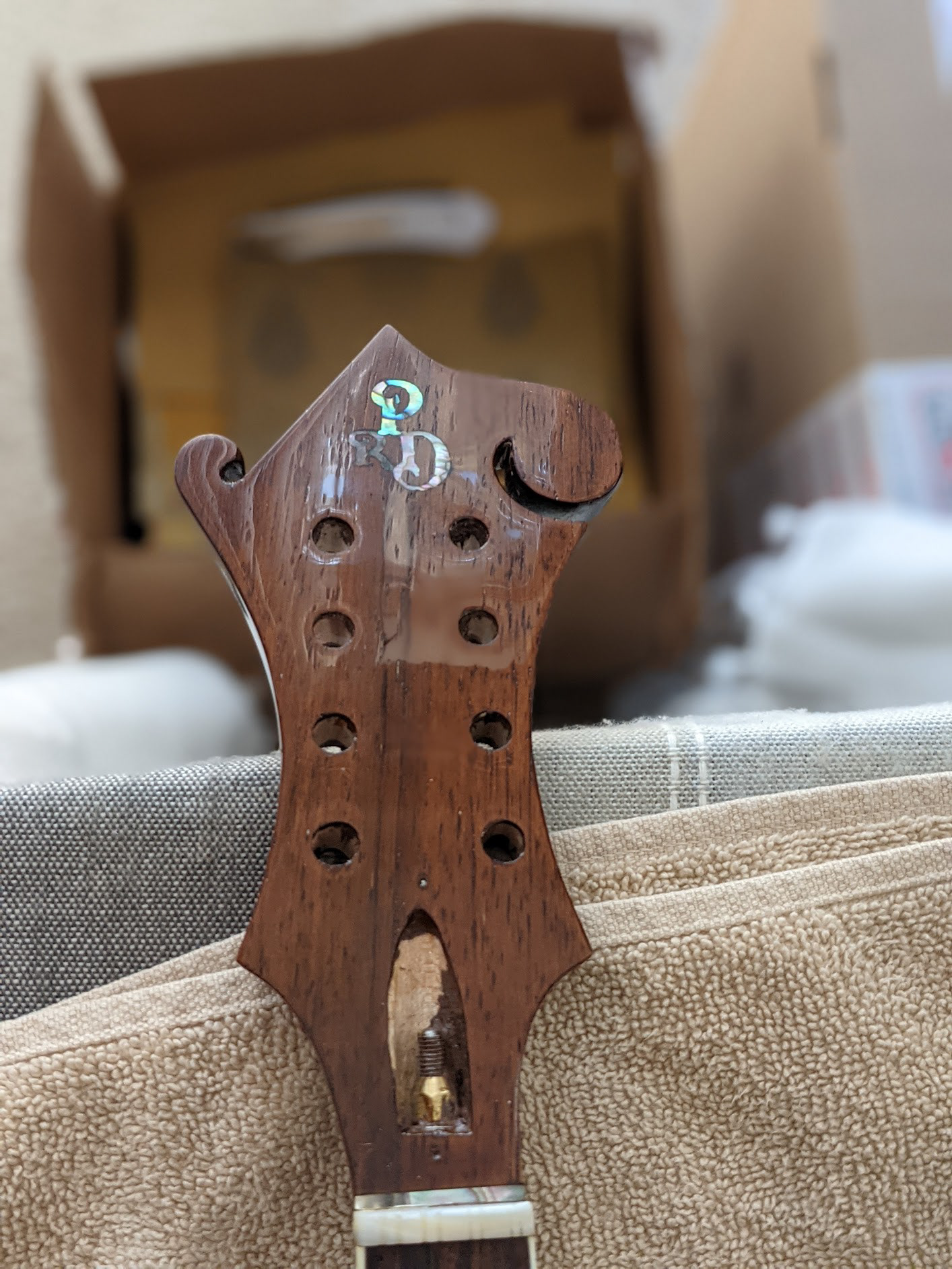 Back To Journal
Next Entry

Carving the Top and Back
April 4-11

Gluing the Fretboard
May 7-9

Headstock Inlay
May 4-5
↑Back to Top